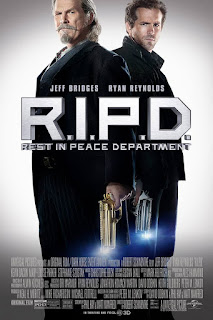 A Boston police officer (Ryan Reynolds) is killed in the line of duty by his partner (Kevin Bacon) over some pieces of gold they found at a crime scene. Upon dying, he is enlisted in the “R.I.P.D.”, which is exactly what you think it is, and becomes the partner of a crusty wild west law man (Jeff Bridges). Together, they return “deados”, that is, people who died and stayed on earth instead of going to the afterlife, to Hell. Basically, it’s Men In Black but with undead monsters instead of aliens.

I liked the idea that the afterlife is a big bureaucratic department, I haven’t seen that done to death yet. I also liked that they didn’t specifically mention Heaven and Hell (although they are implied) and that whoever is in charge of the afterlife is only given as the Department of Eternal Affairs, which is as cute and punny as the title of the movie.

The “deados” were sort of interesting – their whole deal is that if a soul stays on earth after it’s supposed to leave it rots and eventually turns into a monster which can only be seen when exposed to cumin (confirming my suspicions that there is something wrong with people who don’t like Indian food). The monsters they become reflect their character, so for example one guy who is a snitch ends up with a huge mouth, and Elvis is grotesquely obese.

That doesn’t change the fact that “deados” is a really stupid name for a thing. I would even go so far as to say it’s stupider than Dead Like Me’s “gravelings”, which is saying something. I get that calling them something cooler like, say, “deadites”, would draw an undeserved connection between this movie and Evil Dead but still, writers literally get paid to make shit up, they should at least be good at it.

Apart from the innovative view of the afterlife and the reasonably okay monsters, though, this movie is actually pretty boring. The non-banter dialogue is boring, the special effects are boring, even the music is boring which is something I never thought possible.

The characters are boring, Ryan Reynolds was a pretty stereotypical conflicted good guy, Jeff Bridges was everything you expect from the grouchy mentor, and Kevin Bacon was predictably evil, going so far as to do evil things just for the sake of doing evil things. Like, why would he kill his partner when he knew that the R.I.P.D. was a thing? Surely to god if he could wangle the gold out of the undead police’s evidence locker he could wangle it out of anywhere. The only character I found even remotely likeable was the chief of  ghost-police (Mary Louise Parker), because she was sassy and probably also because she didn’t have a lot of screen time.

The story is just Men In Black by way of Dead Like Me with some elements of Bladerunner and an ending that felt like somebody took all the fun out of Ghostbusters. It was like the filmmakers were just slapping scenes together from other movies – there’s even this thing where the characters say “relax body” before doing something a living person would not normally be able to do, much like the “there is no spoon” line in The Matrix.

Despite the fact that the writing does show a slight glimmer of intelligence, a lot of the humour is pretty stupid. For example, Jeff Bridges and Ryan Reynolds don’t appear as their living selves to mortal eyes, instead humans see them as Marissa Miller, and James Hong, respectively. It’s kind of funny the first couple of times it comes up, I guess, but the joke (if it can really be called a joke) gets absolutely milked to death by the end of the movie.

The truly painful thing about this movie is that it’s a pretty good idea and has some potential, but completely, and knowingly squanders it.  There’s even a scene in which Jeff Bridges tells Mary Louise Parker “don’t be a cliché”, which is a piece of advice I really wish the makers of this movie had taken.